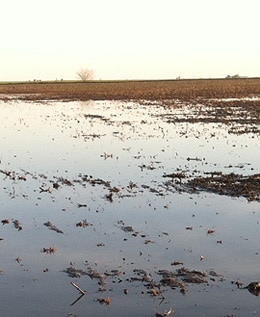 May 1 Isn’t Really A Planting Deadline

Ponded farm ground is widespread in central Illinois, entirely stopping corn planting for the past two weeks. Despite the traditional rush to get corn planted by May 1, over the past 10 years the average planting completion by May 1 has been only 40%. Year after year, the farm experience has been that weather later in the growing season has more effect on yield than planting date, provided planting is completed by the end of May.

Today’s big planters enable very fast planting once soil temperatures and soil moisture are optimum. The University of Illinois has observed a repeatedly-demonstrated capacity to plant half the Illinois corn crop in ten days. Farm operators do not want the yield loss that comes from planting in cold, wet soils, compacted by a rush into the field. The vast majority of midwest farmers agree with this, as only 1% of corn planting has occurred in Illinois and Iowa.

Trent has observed ponding in his fields soak into the ground in a day or so, recharging the groundwater which was badly depleted in last year’s drought. The relative quickness of the pond draining indicates to Trent that there is still plenty of room in the soil for more water. The soil surface is still shiny, meaning it’s too wet to plant. Trent would rather have the wet soil ahead of planting rather than have wet soil, after planting, make seedlings struggle.