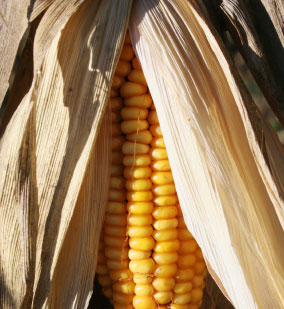 Trent Brandenburg waited for more in-field corn drying before starting his main corn harvest. Early sampling runs came in at 25 per cent and more, but now some is as low as 17 per cent, so Trent is rolling. Trent estimates he has about 10 per cent of his corn harvested (Sept. 25). He is very pleased with corn yields of 230-270 bushels per acre. Asked about row spacing, Trent said he is using 30-inch rows. He doesn’t believe 20-inch rows “are worth the extra expense” to buy more seed, replace planters, and replace the combine corn head for the narrow rows.

Trent estimates that he will begin soybean harvest “yet this month”. His soybeans are also planted in 30-inch rows which he believes “yield as good or better than 15-inch rows.” Trent has not found any disease problems in his corn and soybean crops. He has not used aerial spraying of fungicides this year despite the prolonged wetness. Trent is pleased with the standability of his corn plants. He had expected some stalk weakness from the early-season very fast growth, but is happy to find nothing major hampering harvest.